Still undecided about which phone to pursue. I was down to three but now Sony Ericcson Experia Arc S has thrown it’s hat into the mix.  How could it not with specs like this? 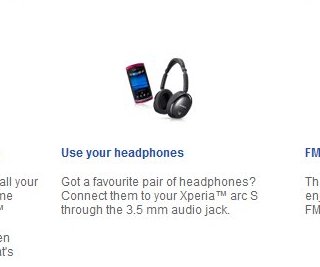 You can plug earphones in to it? What the??? Earphones? plugged in to something? You’ve only been able to do that on listening devices for like 50 years..well done Sony Ericsson. To be fair to SE this is something new(ish) to their phones. I had a couple of their mobiles before phones went smart and you couldn’t plug standard earphones in to the phone – you had to use the special ones that came with the phone or buy an adaptor. Never the less, it was very bad that this was the case; they shouldn’t be crowing that they are now the same as everyone else. It should just be a meek little change.

I just wouldn’t put it on there. It’s like having ‘Making Phone Calls’ as a feature.  That said I would like to extend the invitation to corrupt my soul, that I made to Apple and Samsung, to Sony Ericsson. However I should tell SonyEricsson that getting in touch with me could prove difficult: clearly there are issues with my email as the emails from Samsung and Apple haven’t got through to me. I am assuming that they HAVE sent me an email offering me a free phone though: I will just tell O2 when I negotiate my new deal that they have to give me a free phone on a cheap contract. Wait a minute – why am I thinking of paying for my phone service? O2 – sort me out with a £0 a month contract or I will go to someone else. There – I’ve said it. It’s about time I did really – maybe I should go to Orange so I could get the 2-4-1 texts on Orange Wednesdays and complain about how busy the cinema is because everyone else is there for cheapo tickets.

Tonight was the last of what has been a terrific investment. The Paines Plough Theatre company’s A Play, A Pint and A Pie season at The Royal Exchange Theatre. Three 45-minute plays, each accompanied by a pint (or coke or glass of wine) and a pie (meat & potato or cheese & onion) for £21. All have been thoroughly enjoyable.

Tonight’s final play was a little soured though – for I was sexually assaulted. There was man sat next to me who throughout the play adjusted his seating position. Each time he did it he put his hands on his armrest. Each time the edge of his hand touched my thigh.  He must have done it three or four times – the sick pervert. What kind of man gets his sexual kicks from making very brief, seemingly innocuous contact with another man’s thighs? My main regret is not reporting this to the Police. I am sure this guy is doing this thing all the time and getting away with it. What a sick fuck. He is this decade’s Fred West.