Thanks to a ..I was going to say nursery rhyme..what is ‘Remember, remember the fifth of November’? It’s too short to be a nursery rhyme or song. Wikipedia tells me it was the start of longer songs. Anyway, it has worked as a memory aid: I have never forgotten the fifth of November. I didn’t realise Guy Fawkes was a Catholic and that it used to have strong anti-catholic connotations (still on Wikipedia). I am coming round to it after all these years. Yes, surprise surprise – I have never really been in to the whole bonfire night extravaganza of fires and fireworks: the irony? I love treacle toffee. I know, you wouldn’t believe of it of a character in a Hollywood movie but here I am asking you to believe it is true. But along with St Patricks Day, New Years Eve, Halloween and life, Bonfire Night is something that I tend to try and avoid as it involves other people being*. To be fair though bonfire night has always kind of been big hasn’t it? And New Years Eve has. Some times I not only don’t have a point I also (don’t) make it badly.

*I didn’t miss a word there, I just meant other people existing annoys me. However you could add the word annoying or ‘ overly enthusiastic about something just everyone else is even though you don’t know why’.

After last night’s tea of a theatre pie (not any different from a non-theatre pie) and two Pepperamis when I got a home, I followed it up with a bacon and egg sandwich after a gym visit this morning. Then nothing else. Then drank quite a lot of booze. I can only describe it as a stupid move. Almost inevitably it will (it has, we all know I am writing this on Sunday – why pretend? why fucking pretend?) lead to a bad hangover.

I can only blame myself – I was offered food at my sisters and there was a cracking spread on at my mate’s bonfire that I went to (whaaaaaaaaaaaa? After what you said earlier? I thrive on hypocrisy). However I was too preoccupied  with drawing facial hair on my one-year-old niece’s face with my sister or drinking alcohol. It’s an important life lesson: don’t drink lots on an empty stomach. Sadly, it’s a lesson I have been taught on a regular basis for about 15 years but never learned from. It’s just that I find booze so moreish and when I eat I tend to become full and not want to imbibe. Drinking always wins.

Let’s not end on the terrible adult I’ve become though – let’s remember me when I wasn’t ruined..well not completely: I was still ugly, but I hadn’t been molested at the theatre..maybe yesterday explains by tendency to overindulge…dealing with the trauma, even before it happened. Anyway…my niece has started using the little baby walker thing I bought her for her birthday now she is walking and it reminded me of one of my treasured childhood possessions.  All together: awwwwwwwwwwwww 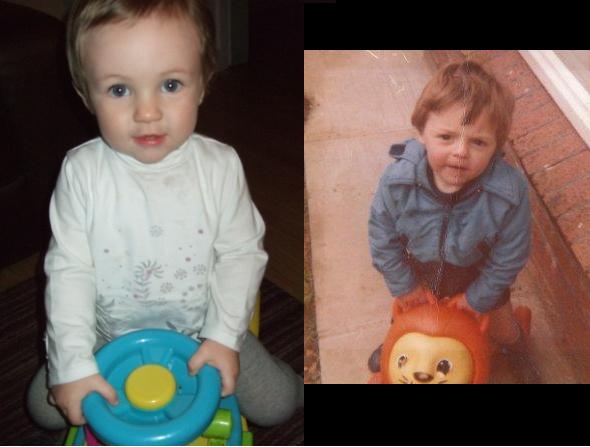 Pop quiz: one of the above children will grow up into a beautiful and intelligent woman one has grown in to one can only be described as a grotesque failure of a human being, which is which?