Delaying my check-up at the dentist definitely didn’t backfire. Some mild toothache was fine as karma.  Dutifully I made an appointment and stopped drinking Coke. Toothache went away. Any normal person would have cancelled their dentist appointment and wondered why they had toothache again in a few weeks. No, not me I had to go through with it. And what is my reward? £50 and no anaesthetic for the filling he said he could quickly shove in right now.

I wasn’t in agony, admittedly, but there was a fucking man drilling into my mouth and no-one had made me numb where he was doing it. That’s a lie actually a girl once left me numb in West Didsbury but she was only being honest about what my face reminded her of. It did hurt a few times. I think he caught on by the way I was making a version of the word ‘ow’ but how it sounds when you have a dental drill, some hands and a suction pump in your mouth. “Just one quick burst,” the dentist said – before he did about another three bursts. Apparently there was a bit of rotting tooth he couldn’t get rid of. He doesn’t fill me with confidence at times.

I posed for this picture LESS THAN AN HOUR after I had (a kind of) surgery. For reals. I am the one on the right. I don’t know why there is a lego Clark Kent in The Trafford Centre but I was damned if I wasn’t going to have my picture taken with it. 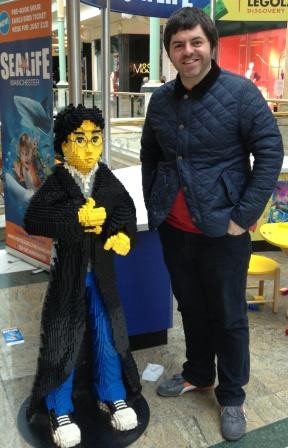