Potential ways this blog about going to see Eddie Izzard could have gone:

I’d say a significant part of doing something well is preparation. Admittedly a lot of things negate this by being things you can be naturally good at. But with the things where you can’t naturally be good at preparation plays a big part. So it was sensible to not really look into how to best use my new camera before going to watch Eddie Izzard.

This isn’t exactly a terrible picture, but it was still quite light and it didn’t suggest there would be much success when the lights went down. What would make matters worse was that there was a red light that came on when I pressed the button – not to take the picture, you know how you do the soft press of the button before you push it all the way down, so it will focus? Well then, then there was a red light coming on. And not a dim, small red light. A red light that people nearby would notice and could be distracted by. Not being a cunt (well OK – I am a cunt, but not in this way) meant that I couldn’t really bring myself to use it after I noticed the red light. But even then – it still wasn’t a great picture.

And ‘isn’t a great picture’, in this instance, means ‘is a shit picture’. It might be something you’d accept from your camera-phone. But this was a camera-camera. And meant to be good. I hasten to add this is a poor workman acknowledging he is doing a bad job with a good tool, rather than a poor workman blaming his tools. I couldn’t call it a natural ability but I am adept at working things out on electronic things. 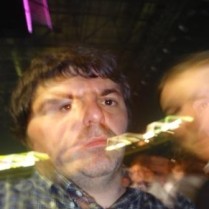 The camera had clearly taken some drugs

Hello! somehting is starting to happen – those people are on the other side of the arena and look vaguely distinct

As you can see, I was slowly getting somewhere. And my the end of the interval I was able to invade people’s privacy some distance away taking pictures they would neither want nor given permission to be taken. But still it wasn’t quite dark like it was for the show and now I had turned a small red light off would the camera fail to function at all? No. It would function and I would be able to get a couple of shots that I was quite happy with.

Unfortunately – it’s really interesting this isn’t it? – I had messed about with the size of the images the camera was producing. So the pictures were looked good but could have looked even better. Was this bit of bad luck my own small sacrifice so that the equal marriage law will be passed? I will have to assume so – and I will accept this pay-off and not even ask the non-hetero community to thank me. Though I doubt they would as they are too busy trying to marry their own reflection/pile of wallpaper cuttings/whatever some insane Tory has likened same sex marriage to this week.

What? You are interested in the show Mr Izzard put on and not my poor attempts to get a picture of everyone’s favourite action transvestite? Well he was very fucking funny wasn’t he? There were far too many highlights to go into and you can’t really capture Izzard’s genius by paraphrasing him can you? He did some very good stuff about making dressage more interesting by combining it with burglary. And I laughed out loud with laughter at his observation about lions never being filmed stopping running and breathing heavily because they are out of shape.

There was all the elements of your classic Izzard show – actors as mythical lords, names rhyming, death stars, metacommentary on the success/lack of success of some of the jokes. However, as ever, it didn’t feel tired or predictable. And always seemed funny.

Pleasingly for yours truly he also displayed a penchant for cardboardpentry, as he testified to building a false bottom in shoe box in which he stored stolen teenage make-up.

Here are a couple of pictures I was quite happy with: 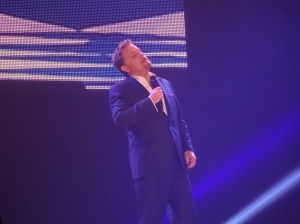