Some people enjoy a nice walk when they have a hangover. Some people like to get back on it. Some people go for a bike ride. Me? Increasingly I just go on the internet. And the internet rarely disappoints. Today it gave me:

I’m definitely fed up of the talk of her. Certainly don’t think it is going anywhere: today saw a party in London, tomorrow adults are buying a song from The Wizard of Oz to try and make it number one to annoy someone who’s dead and death’s equivalent of a wedding – in the form of her funeral await. So, several more days of people celebrating the life/death of someone being news.

More than just news – it was BREAKING NEWS for the BBC that her daughter was saddened by her mother’s death. This would certainly give Carol Thatcher a narrative should she want to be a contestant on something like Britain’s Got Talent. I don’t watch BGT but am going to comment on it anyway. How’s about that? You like it when I comment on something without watching it? You like it,uh? Those are real pretty eyes…sorry…gone off on somewhat of a tangent there. Must stop reading How to Talk Porn-y While Admitting You’re Making an Ill-Informed Opinion but it’s such a page-turner.

Judging by the microblogs I was reading, on the social networking website Twitter, more people are getting frustrated with ‘sad story + ability to hold a song’ equation for a lot of the people featured in talent shows. While I don’t care for the medium I have watched them and I have always thought these were a dangerous thing. If there is a story there then fine but when you make it a staple of almost every person’s journey..everything is a journey these days. People don’t do things – they go on journeys and they have narratives. Anyway, people have got used to the hard luck equation of ITV televised talent contests and you can see people pushing the bad news because they know it will help them.

You get the impression that there are 15-year-old with a decent voice looking at their healthy parents with a sense of frustration. Perhaps encouraging them to take a job working in Iran or to drive while drunk.

I thought I’d check when my last log-ins were on the different things I access the internet on. Not looking promising for the space-time continuum. 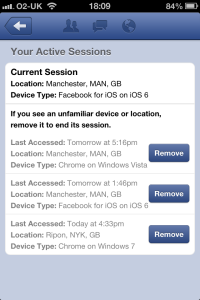