If you took the last two days of my life then you might get the impression that I am more of a theatre goer than I actually am. So I have to hope I am not being profiled by some Private Detective in the last 48 hours, a Private Detective working for some organisation looking to give a millions pounds to someone who doesn’t go the theatre very often.

Yesterday I saw a brilliant production of The Ladykillers at The Lowry. Today I saw To Kill A Mockingbird at The Royal Exchange. Definitely different plays. However they shared a lot: great scripts, great casts, great direction and great sets. And, of course, they both shared that they were based on brilliant source material.

This is where I have to make an admission: I have never seen the classic British film The Ladykillers; I have never seen the recent Cohen brothers re-make of The Ladykillers. I went to see the play because it was adapted by Graham Linehan, one of my favourite writers. I would guess many people in the audience were not in the same boat as me and were there because of their affection for either (though probably the original) film. I really enjoyed the play, though if I was being honest I had hoped I would laugh a bit more given the writer.

On reflection it was naive of me. The play is very much a black comedy. To expect the kind of laughs Linehan delivers with alarming regularity in his TV sitcoms was just stupid. In a stand alone play the action drives the content, a lot of the laughs are situational and are less LOL than well LOL laughs at a well established character behaving to or against type in a scenario – like what happens in a sitcom. (And the set was amazing, ditto effects.)

I have, like lots of people, read To Kill A Mockingbird. This production has gained a lot of positive word of mouth – deservedly so: it’s brilliant. And full of very funny moments, I did L OL on numerous occasions, certainly in the opening half anyway. As anyone familiar with the story will know, early on the film is all about childhood innocence and fun. This was done brilliantly by the cast: James McConville,Rupert Simonian and (in particular) Shannon Tarbet were all brilliant as Dill, Jem and Scout.

I’d forgotten that Dill introduces himself with the superb declaration “I can read.” Or maybe it just didn’t stand out when I read it the way it did in the play. Either way I am tempted to introduce myself the next time I am at a meeting at work by saying, “I am Philip Bridgehouse and I can read, I can read anything you have got.” Though could intimidate some people/come across as big headed with some of the people I have meetings with.

The passage of time and sets were all brilliantly handled, leaves falling from the sky when Autumn came, snow falling for winter. This latter effect produced an alarming procession of coughs from the audience. I am sure that whatever produced the snow may have contributed to some people having to cough but I am pretty sure some people were doing it because other people were. Like yawning.

Like its source material the joy and innocence of the three children’s lives and their fascination with local recluse Boo Radley give way to the horrible trial of a local black man falsely accused of rape. In this second half the innocence is gone: Atticus Finch defends the man, Tom Robinson, proving that he did not rape his accuser. Robinson is still found guilty and sent to prison where he is killed….should I have said something about a SPOILER ALERT here? I kind of assume people know the story, that said if I am assuming people know the story why am I recounting it? Who knows what goes on inside my head? Not me that’s for sure.

In summary: it was a brilliant play and I can easily comprehend why it has been lavished with praise. You could reason that it should be easy to make a good play out of source material as brilliant as To Kill A Mockingbird. I am pretty sure lots of people have though. Everyone in this was very good and I really liked the way it was soundtracked by pieces of bluegrass music by some of the cast. And how well the space was used.

No matter whether it be re-reading the book, watching the film or watching this play there is always part of my head thinking that Tom Robinson wont get found guilty which must say something about the mockingbird in me I suppose. (My what a trite way to conclude). 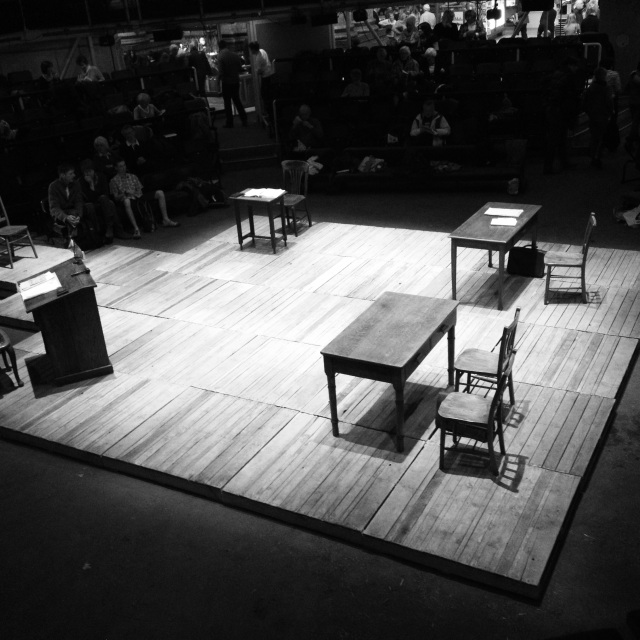