As part of the course I am on today we had to make a few posts on a forum. One of the early tasks was to receive quotes from this forum and assign them to other people in the group. Mine was about going to the gym regularly and being able to ‘easily bench 400lbs’. It was clearly meant as a joke. I am a fat man with thin upper arms, the gym/being strong thing is clearly either a joke or a lie (which is essentially a joke that no-one laughs at).

The point of the joke was kind of twofold:
1. I am not strong or a gym visitor and its kind of clear that I don’t do weights.
2. People who are all competitive and proud of saying what they can lift (to people haven’t asked) or a bit idiotic.

(There’s kind of a third joke about the way I think language is funny and how the phrase “bench 400lbs” sounds funny – but that’s really niche in the sense of it was a joke for me.)

None of the above is funny. I put it on a forum for a management training course at work. I was going for flippancy. Throughout the day there will be references back to it by a few people in the room. But they seem to be jokes in the sense of “there’s no way he can bench press 400 lbs” jokes. (I would out jokes in inverted commas but that’s almost as annoying as continually explaining things in brackets.)

I’ve established that I can’t lift weights. That was my joke. That was clearly my joke. It wasn’t funny – well it was a bit, I can’t help being naturally funny – but it certainly doesn’t hold up to being repeatedly referenced. Maybe the odd callback, there’s something heavy needs lifting for example. But just saying that I can’t lift 400lbs repeatedly isn’t funny. Because I can’t and I admit it freely and don’t really care that I can’t. So why so bothered? I think it’s because people didn’t get the joke. Or think they did but they got a joke I didn’t make.

Ever have so many cushions on a hotel bed that you’ve nearly questioned your entire being? 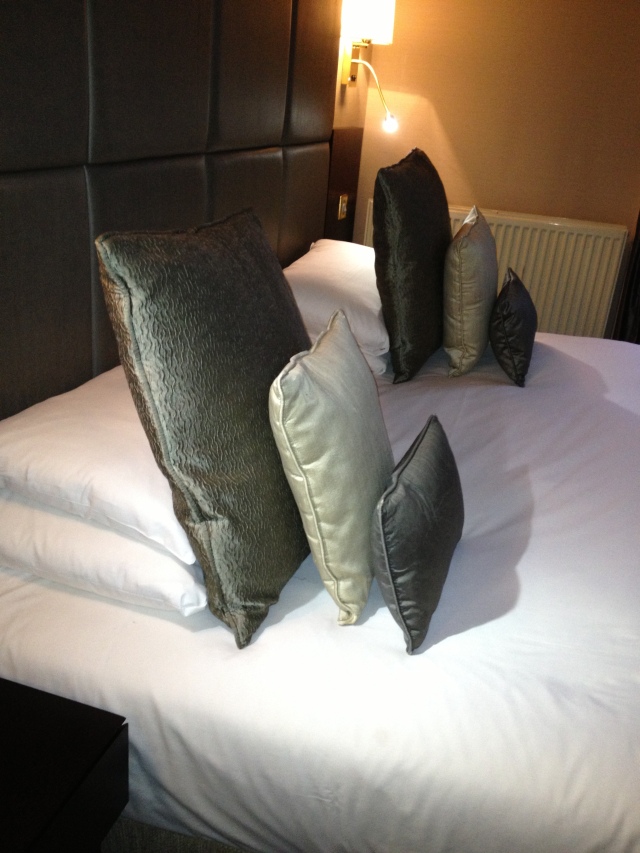