This afternoon was a perfect example of how I behave when I need to be somewhere. With the emphasis not on need.

First of all I sat around wasting time on the internet. Though I say wasting time, I was watching things such as Alec Baldwin’s opening monologue from last night’s NFL awards. Hello!? Time wasting? Sorry we’re speaking a different language if you think there’s an issue there.

The train I was intending to get was at 1.43 PM. Having got up at eleven I made the rational decision to get a taxi to the station rather than try and get dressed and get a bus to the station in two-and-three-quarter hours. What am I? Superman? I decided I needed to order the taxi at one to be safe. But I got distracted looking for some pictures that I’d known I needed to look for all weekend. So, it was nearly ten past when I ordered the taxi.

“Five to ten minutes.” That’s what he said. Fifteen minutes later I was outside waiting. I rang up and was told it was just around the corner (John Bishop would get ten minutes out of this, normal speed talking comedians would get three minutes). Five minutes later it still hadn’t appeared, those corners are a nightmare. I had mentioned my destination was Victoria Train Station. The second time I rang I said I was needing to catch a train – just in case they hadn’t assumed I was going to the train station for coffee.

The last time I rang was just after half past one. It was over twenty minutes since my first call and now it was very unlikely that I would make my train. Partly out of annoyance and partly out of a surprising aversion to sloth I rang again and cancelled the taxi. “He’s definitely on Lloyd Street mate.” While I communicated my gratitude for him being nearby I did have to say that now getting a taxi was pointless as the sole reason for getting it was to make the train. Now all I would achieve would be being very early for the next train.

I am able to relax too much.

In short I ended up trotting through town and only just making the later train (after a battle of nerves with a self-service ticket machine being fussy over which pound coins it would accept).

I scanned some old pictures in, later at my sister’s house, from eight/nine years ago. Often when I reflect on how I am unattractive to women I like to convince myself that my lack of confidence/shyness were big factors. Looking at this picture of myself from seven years ago it has to be said that being an ugly, fat bastard also probably played quite a big part in it. 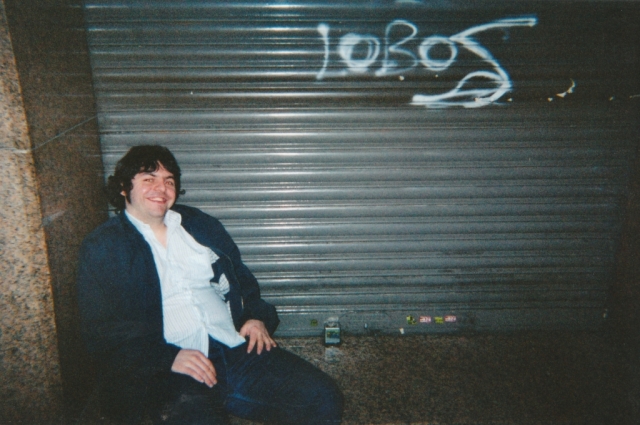