Quick tip for visiting The Trafford Centre: start at one end, do upstairs all along until the other end, then do the downstairs all the way until you are back at your starting point. Voila! You have done both levels. This system also works if you do downstairs first and then upstairs. NB: this can get tricky when stores have more than one level; Sure this is no problem when they are at either end (John Lewis/Debenhams) but if you do it at some point inbetween (eg. Boots/M&S/H&M) you have to be VERY WARY that you don’t end up carrying on on the wrong level (because you could miss out on a kite sale or pop-up HMV).

One idea I do have for making The Trafford Centre more organized is to sort stuff by size rather than by shop. So you’d just have all the 32-inch waist jeans in one shop, for example. People wanting 32-inch jeans would therefore just need to go in the one place instead of having to go in all the shops. You could specialise further, given the large amount of space at The TC, you could have a shop for mens 32-inch jeans and one for women’s 32-inch jeans. Different colours could go in each corner – no need for another shop, that would be ridiculous.

Could it be any more disorganised than it is now? Yeah, all the GAP stuff is in one place but who seriously wants jeans in their size and a coat for a small child and jeans for someone a lot taller? I’d definitely say more people go shopping looking for all things in their size than they do lots of different things in all different sizes but from the same store.

You could group things together that are likely to be wanted as well – size three women’s shoes near dresses in size 30 and books about owls (not done my research on this so these are just examples).

I am going to write to John Trafford, owner of the Trafford Centre, with this idea.

There didn’t seem to be much of a wait on as I approached the Payment Takers at Debenhams. Aside the three people paying there was only two people in front of me – and they were a couple. After Eights!

I’d have said I would definitely only be there waiting and then paying for four minutes (tops). But each of them wanted something else. Something other than just paying for things. The sign says ‘PLEASE PAY HERE’, it doesn’t say ‘PLEASE PAY HERE AND TAKE QUITE A BIT OF TIME ASKING ABOUT STUFF THAT COULD BE DONE ELSEWHERE IN THE STORE WITH ONE OF THE MANY STAFF WALKING AROUND’. At least I don’t think it says that, my eyes stop looking after the word ‘here’ as been read. If it does say all that then my apologies to the people in front of me I wished dead.

Then the couple in front of me got to a free till. It turns out they both didn’t understand what anything was. The Sales Assistants had to teach them language and concepts of meaning until they got to a point where they were able to ask if they could use some expired vouchers. They were not very happy that were not able to use vouchers for a book shop in Norwich that had shut down in 1992. The staff patiently explained that this was Debenhams and not a defunct book shop in East Anglia. However, the couple just raised their voices, citing that they had only just gained a rudimentary grasp of language and meaning. In the end they were offered vouchers for picture frames only for 80% of the vouchers original value. They grudgingly accepted.

Why can’t there be tills where all you are allowed to do is buy things? There could be a separate counter where people could ask if the vase they are buying is available in a less believable size or if their coat will shrink when a ghost appears. It’s fine that people have these questions and that stores think it is good service to answer them. Just let the people who want to pay and get out pay and get out.

Is it wrong to be mildly amused that this needs to be a sign? Am I a smart arse for thinking this is so obvious that the sign is actually a bit of an insult to the customer? Well I must be. Because the sign is there. And while I am sure most people are cool on what something that did cost £6 costs after a 50 % reduction there probably might be quite a few people who could struggle with quickly halving £45 or £65 (is it condescending that I acknowledge that?).

The thing is that the half-price sale was on toiletries that were left over from Christmas and the most expensive things were about £15 (£7.50). 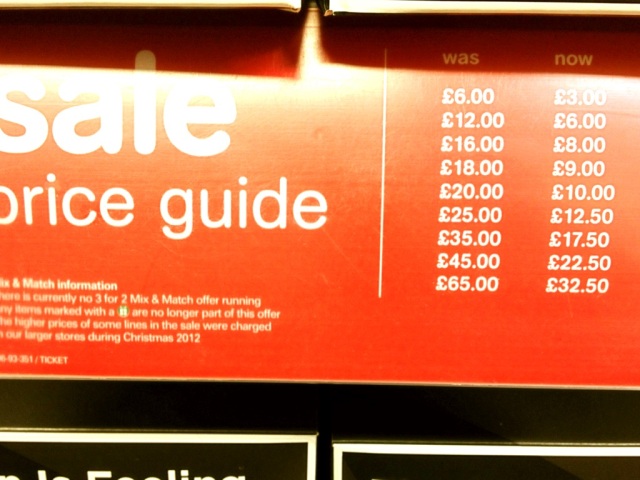