Day two of the Berlin Birthday Break was the actual birthday day. Accordingly we spent the first couple of hours visiting the Olympic Stadium. Honestly this was not my decision. Sure, going to a football stadium and visiting a foreign football team’s souvenir shop sounds like something I insisted upon. But I didn’t so deal with it and stop suspecting me.

We chose not to walk under a bridge with Olympic Stadium (in German) [PICTURE 1] written on it and walked up to a road and followed some signs. It was really misty so we ONLY had German road signs clearly stating where the stadium was to trust. Amazingly we got there, though there was an element of trust involved in walking into the mist looking something as missable as a very large stadium and attached facilities for a variety of sports. LUCKILY we managed to stumble upon it by walking straight down the middle of the walkway to the stadium. What are the odds?

The Olympic stadium is fucking good, like. I probably took too  many similar pictures if I am being honest [PICTURE 2]. This is my third Olympic stadium (Rome and Barcelona are my others trivia fans¹); it should be four really. Not getting anywhere near the one in this country is a bit of a shambles (see footnote). For some reason I kept reverting to thinking about the 1972 Olympics – like some big mis-olympic-remembering idiot. Of course this Olympic Stadium was the stadium that Jesse Owens pissed Hitler off in, yet Hitler still didn’t question his philosophy on life despite a black man being better at running than a man with a pale complexion and blue eyes.

Whatever the Third Reich did here is not to take anything away from a beautiful stadium. It is (of course) the home of Hertha Berlin. This was somewhere where I was sure to find a great hat. No. No, the good ones had bobbles on them and I generally prefer hats not to have bobbles on them. Fact.

After we left the stadium we followed a sign pointing to the Train Station. It took us under the bridge that we had been next to earlier – before doing a 15-minute walk to the stadium rather than walk under it. If you learn one thing from my blog learn this: just walk under the bridge when you come out of the Olymic Stadium’s train station. Save yourself a good 8-10 minutes. (You’re welcome.)

Of course it couldn’t all be big stadiums. MJEA wanted to go to the aquarium and it was her birthday after all. After another Christmas market (me: pork steak on bread; MJEA: currywurst – again!) we tracked down the aquarium. My opinion on aquariums: seem a bit cruel on fish; not that interested in looking in fish; they always smell a bit odd. Berlin’s aquarium did little to dispel these preconceptions. Although it wasn’t just fish that were stored in small living quarters – there was a reptile house and some insects and some arachnids as well.

As well as having some ideological/boredom issues with aquariums they are also a prime example of a place you find yourself taking photographs that you will NEVER have any interest in looking at again [PICTURE 3]. See also: views from balconies, pictures of the sea and pictures of large groups at weddings. Some of the fish did look quite interesting (ugly) but you are taking pictures in quite dark rooms of things through very thick glass that people have their grubby hands over. I don’t even know what that thing is below; jellyfish maybe?

We’d been to several Christmas markets but hadn’t got to the one I thought looked like the best one, WeihnachtsZauber Gendarmenmarkt (obviously). But a little bit of conversating with the good people of The Circus Hotel by MJEA and we thought we knew where we were going. We did – I know the previous sentence had the feel of a preamble to an anecdote where we don’t find it. Or at least struggle. But we just got on a couple of U-Bahns and then when we got off it was pretty much in our faces. And we hit the bitch [PICTURE 4] after a birthday tea for the birthday girl at a local German bierkeller. (The word German isn’t really needed there but I put it in anyway.)

Was the Gendarmenmarkt worth the wait? Well I hadn’t really waited. I had just hoped to get there at some stage. It was quite good. It was a bit posher than the other markets. There was a man there who looked a bit like God fashioning things out of wood – but there wasn’t a woman singing about the wonder of Christmas. You had to even pay a Euro to get in. It didn’t stop it being crowded as fuck like. Why would it? It’s not a massive fee. Maybe the people of the Manchester markets should do something similar. Get some more coin out of it. Plus it might filter some of the fucking scum out.

Save for a nightcap at the hotel our German odyssey ended with the Gendarmenmarkt. It didn’t literally end there – we had to get up in the morning and get to the airport and then get on a plane. Whatevz.

¹Technically it is my fourth as Wembley was the Olympic Stadium for the 1948 games but I am not counting it as it wasn’t a proper Olympic stadium. It’s scrattery to not build a new stadium for an Olympics – especially when there is public money to burn in the process.

Advento Image #19 : Berlin Montage #2 aka the hash sign instead of the word number 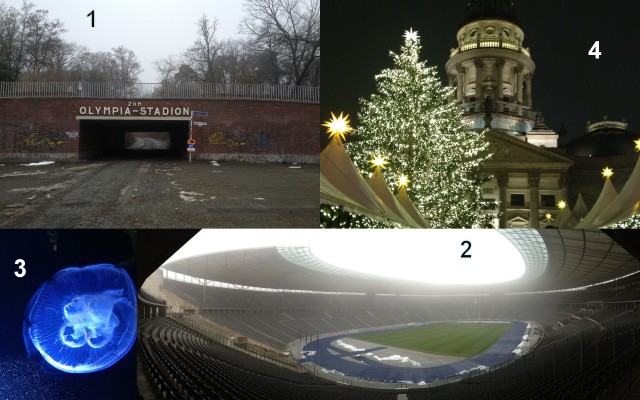