I don’t know how I ever get anything done in work because I find it impossible to achieve anything in the time I am not in work. By the time I have had a lie-in and watched a bit of cricket I was looking at lunch time – square in it’s stupid, fucking semi-abstract face. There was only one thing for it: I was going to have to cut having a shower out of my activity plan for the day. Well one of the showers, the one after football was non-negotiable. Therefore I went into town shopping not only looking like a hobo but smelling like one too.

I had full on plans to get a Starbucks while I was in town. Not that I condone their tax avoidance one iota. But the laws allow it. And I doubt all the other coffee chains people are using are dirt free. People targeting Starbucks to boycott but still probably using Google and Amazon also annoyed me a little bit; it was the easy target for do-gooders.

I thought how hilarious people would have thought it would have been if I had dressed in a foam suit that was the word ‘TAX’ and kept going near Starbucks but not quite in it, thus avoiding it. And imagining a white person with dreadlocks thinking that was hilarious made me even more sure that going to Starbucks was a good idea. But I didn’t go in. I didn’t go in to three different Starbucks. Fucking stupid conscience. I am going to have to have sever words with it because I don’t really like all the other coffee chains.

I was in the Apple store – I think they pay their taxes so they are OK right? I didn’t check up. I read The Guardian though so they would probably hush it up if Apple did a Starbucks. Apple was rammed but I still got some assistance quite quickly by standing near something quite expensive looking confused but able to impulse buy something costing several hundred pounds. Ha! Idiots. I just wanted an anti-glare screen cover for my iPhone.

I did ask the guy about replacing the back of my phone – there is a small but not significant crack on the back – and he started showing me how to book an appointment with the Genius Bar to get said repair. The word genius is being banded about quite a lot by technical support – and I mean O2 and Apple, I’m not really sure of anyone else – and it seems to just describe people who tell me things that I have worked out to try for myself.

Anyway, by the time he’d shown me how to book an appointment, which I already knew how to do – but he was an assistant not a member of the Genius Bar crew so I wasn’t mad at him – some other assistant was on me trying to take my payment for my anti-glare film. While taking my card details he explained to me that there is now an app for the Apple Store where you just pay for stuff by scanning the bar code with your iPhone and the money comes off your iTunes account and you just walk out with it. I suppose it’s the perfect thing for people who like every element of shoplifting except the not paying for the goods.

“Thanks for your help, mate,” I said to the idiot whose great customer service was making his own job completely futile.

I’m not sure what troubles me most about this. Whether it is that there is a section called Painful Lives in a book shop suggesting that the main categories of non-fiction are sport, travel, art and people who had a really shit life. Or whether there are so many people who have a shit life and are still better at writing than me. My upbringing was – at best – not as good as some people’s. Prince William and Harry had better resources for example – their mum’s head did fall into itself because of excessive paperazzing. Jesus, William and Harry’s autobiographies are more likely than mine to get into Painful Lives section.

Advent(uring into Christmas) Image #13: Just a Bit Too Fucking Much

Just in case anyone forgot what a house without a ridiculous amount of over the top Christmas decorations on it looks like I did a wide shot so you can see one – it’s the one on the left. 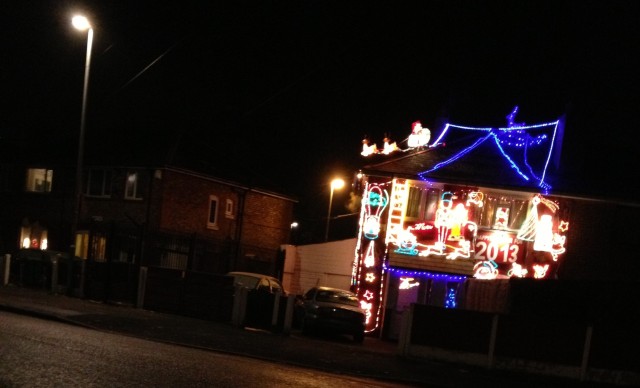