This story is getting overshadowed by the current trials and tribulations of our national broadcaster.

Surely this is the kind of feel-good story that everyone should be getting behind. OK, so it wasn’t so funny if you were the people 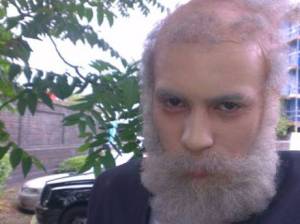 who were tied up while the robberies took place – fair dos, some of it is shitty. But some of it is pretty fucking impressive. Don’t pull that “how can you say such a thing?” shit with me. If this was in some quirky American film you’d be fucking loving it.

Correctly (some might say) the Independent has portrayed this as a crime story: The perpetrator is a bad lad showing no mercy to get his paws on some cash…

But look at his fucking disguise! He’s sixteen! He looks fucking brilliant.

And he did another robbery in a disguise including dreadlocks. He is the Little Britain of schoolboy armed robbers.

My point is that if we found out some other information about him – he was raised by wild dogs, his parent having abandoned him because they thought he was silly; he was being bullied; he needed the money to save an animal shelter; he needed to buy his grandmother a new kidney; his little brother owed gangsters money. I could go on. I couldn’t – “I could go on” is a phrase often trotted out by people after they have said a few things when they in fact couldn’t go on. Try it, the next time someone says, “I could go on,” to you again, invite them to do so and watch them struggle¹.

I think the quotes from the 5-0 are slightly contradictory:

“It is even more shocking to know that this level of violence was inflicted by three school boys who went to extraordinary lengths to research, plan and get away with these offences, demonstrated by Alura’s sophisticated disguise.

“These young men now face considerable terms of imprisonment where they will have plenty of time to think about the consequences of their actions.”

Plenty of time to think about the consequences of their actions? Has this DC Vicky Bailey seen any films set in prisons. At best they’ll be wise-cracking inmates cooking up a massive heist as payback for the time wasted on C-Wing. At worst? Fucking hell you don’t want to think of the worst case scenario with the kind of evil genius at work here, but it probably involves a lot of people locked in room that’s on fire. Even somewhere in between best and worst involves them coming up with increasingly ingenious ways to escape/get one over on the Governor.

But I’ll wager you an entire cow of milk that they won’t be thinking about the consequences of their actions. No way.

“Prisoner 1819824 what are you doing?”
“Nothing, sir.”
“Nonsense 1819824. Tell me what you were doing.”
“I was thinking about how the employees of a Jeweller’s I robbed probably have nightmares about it, Sir. And how maybe the owner of the Jewellers tightened up his security protocols in light of what I and my accomplices managed to do.”
“That’s better, 1819824. Now get to solitary – three weeks in the hole will teach you to reflect constructively on the repercussions of your crimes.”
“But Sir……I thought that’s what I’m meant to….”
“I don’t care what the fucking Flying Squad hoped you’d do in here you snivelling little wretch – I’m a fucking evil Prison Guard.”
etc.

¹Unless it’s Paul Merton or Eddie Izzard – those guys could improvise any old salsa and have you chuckling away like no-one’s business. Ditto regulars from Whose Line Is It Anyway (UK version).