You know what I didn’t even mention yesterday? N1ckE C@ampb3ll replied to me on Twitter about the blog from the other day. Fair plays to the lad, I wasn’t gushing about his show/call-in and just talked to me about the issues I had discussed – rather than resorting to pointing out that he is significantly better than me. Fair fucks, it’s easy for me to cast aspersions – but it would be a bit naive to think he doesn’t know what he’s doing. Anyway here were his replies¹: 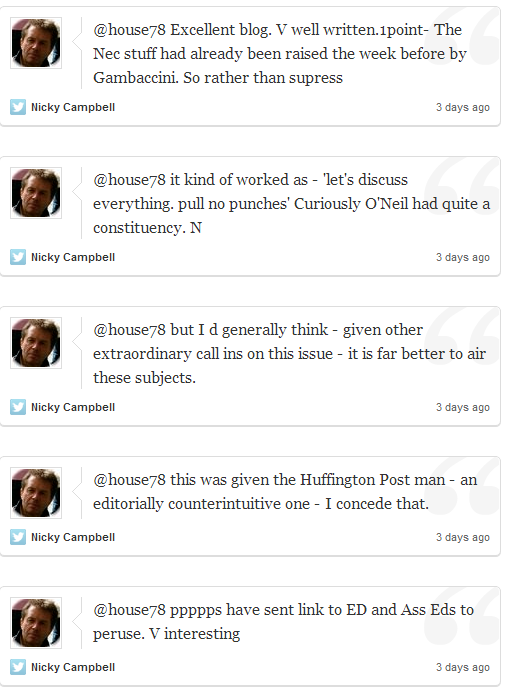 I think I’d have just called me a cunt. Probably against BBC rules. I suppose, in a way, I kind of pay his wages (a very, very, very, very small amount of them – even if all my license fee went towards his salary) so he should be able to treat me with some respect.

It did beg the question of whether or not I am comfortable with such feedback – or if my cojones are based on the fact that no-one reads the blog, let alone the famous people who I occasionally may diss. Well this is only the third time it has happened – the first time it was a bit awkward  and the second time it happened it was a delightful affair. Oh, actually there was another time – another cracking interaction.

It’s a popular thing to discuss is neg-ing people. It gets a lot of pipe on Twitter – where famous people are happy to break down walls and get praise direct from their fans but they don’t want the negative side. And I’m not talking the nasty hate-filled malicious nonsense. I mean can’t someone say they are a bit disappointed by someone’s new song? Are we only allowed to be positive. In short I think the answer is ‘I dunno’. Seriously, though, you should kind of be prepared to say to someone’s face what you write in a tweet where you @mention them. But otherwise if you’re just saying “Kranz Willwolf’s new album is not as good as his last one” and not “@KranzWWolfz’s new album is not as good as his last one” then that’s fine. If Nicky Campbell or Dave Haslam want to go for looking stuff mentioning them then fair dos – but if you go looking you have to take the rough with the smooth. Absolutely no problem with either reaction either – not sure NC read my blog to be fair (well written?) and DH got a bit defensive but that’s hardly a bad thing in a human being.

The point is some people – me included? – think it’s OK to be critical of people in the public eye. I put the question mark after ‘me included’ because I’m not sure I think it’s OK. Hopefully each and every person I mention might get the general flippancy about much of what I write. And when I am not being flippant I deserve any comeback I get (and when I am not being flippant I think whatever I am writing has merit – so I stand by it) . That four people I have mentioned in my blogs (over 700 and counting) have got back to me definitely means this is an issue that I need to address.

Maybe the problem is grey areas. A lot of people struggle with what constitutes this and what constitutes that. If you say it in the right way, with a bit of respect then surely it is fine to say you don’t like some things. That said, I can be right mean about some people without a moment’s thought. My justification would be that they are rich and famous despite being shit – and they get lots of praise of lots of other people. Still, I think it if I was famous and was getting 10000 fan letters a day telling me how gorgeous and talented I was I would still probably Google myself² and cry at the one person in the world who didn’t get what my appeal was.

¹This, embedding this image, was another one of them things that takes an inordinate amount of time. See I created a ‘story’ on Storify – which is pretty much what you see there – but it proved a step too far to embed it in the blog in that format. It was just a plain text version of it. What’s the point getting tweets from the presenter of Radio 5 Live’s Breakfast Show if you aren’t going to visualise it somehow? Plain text? Pah! Stuff and nonsense.
² I do this now to no returns – save the odd Amazon review. I would kill for a heavily negative blog about me. I think it’s called vanity.