Remember the whole controversy with my niece’s birthday card? Well it still hadn’t arrived yesterday. I was a bit miffed. Having left it to what I thought was the last minute only to realise I was, in fact, several days ahead of schedule and to find out that the card hadn’t got there either way was an annoying state of affairs. Almost as annoying as that last sentence was badly written. I was so annoyed that I reported the missing letter to Royal Mail – WITHOUT CHECKING HOW LONG ONE IS SUPPOSED TO LEAVE IT BEFORE A LETTER SHOULD BE REPORTED AS MISSING. Yes: that annoyed.

I even included a reference to a disappointed child, read: 15-year-old who wants for nothing.

This morning I messaged said niece, reiterating my disappointment that the card had not arrived. She replied “I got the card!!! My mum sent a voicemail before.”¹

I was a bit confused. Why was she not at home? (i.e. why was she being told by voicemail?) Why was the card getting there after 6 days? Why was there post on a Sunday?

An hour or two later I noticed a red circle by the phone icon on my phone. Who would have left me a voicemail? Ahhhh. The voicemail was to me, my sister had left me a voicemail. Listening to it explained everything. The card had arrived the day after I posted it. No-one recognised my handwriting – this in itself isn’t any kind of crushing thing emotionally: I change my handwriting all the time. Or rather no-one had recognised that the handwriting was mine. My sister’s partner had recognised the handwriting has his aunt’s and they had put it with the pile of cards to be opened on the birthday.

I know what you are thinking: your niece’s mum’s (that could just read sister instead of niece’s mum) partner’s aunt is (expected to be) sending your niece a birthday card?? No wonder I have such a sense of inadequacy, I have been getting about three cards a year since the cut-off point of being about fourteen.

I did watch the maniac jump out of the little tank and fall to earth (very quickly). To be fair I wasn’t jumping on the bandwagon as I have (not closely) been following Felix Baumgartner since I read this article a couple of years ago. When something hasn’t been bettered for 50 years you have to wonder why bother. I mean televisions have come on leaps and bounds in the same time period – but there’s a reason, people NEED bigger, flatter, more well defined televisions. NEED. As far as I can make out there is little to be gained for the human race by one of us falling 128,000 ft from a balloon. I suppose in the case of things like this, it’s best to be a bit Barry Norman about the whole thing and ask, and why not?

I did a great joke while watching it. The meteorologist on the project was called Don Day. And I was all like, wouldn’t that be an appropriate name for a Spanish cartographer? Hey??? Hey????? Oh come on. It’s a great joke. A proper great joke. If Stephen fucking Fry had made it everyone would be wearing t-shirts with it written on and there would probably be a play and then a film about the joke. It’s just snobbery that I am not Stephen Fry that has stopped me becoming a millionaire on the back of this joke. No other reasons. Shush. No other reasons.

The guy doing the commentary on You Tube said at one that he (Felix) wouldn’t be technically going into space but that it would be a bit like being in space. Technically. What else do we have to gauge what space is? We have a measurement of how far above Earth space starts – made by science people. That line is twice as far away from Earth as Felix Baumgartner rose to. I’m not trying to take anything away from the fucking idiot; what he did was the stupidest most idiotic thing I have seen someone do in the name of daredevilling – I am just saying sciencters made the rule for when space starts they can’t start saying something is really space that doesn’t fit their rules just because someone is jumping from a really, really high place.

Because of the size of the capsule FB couldn’t see behind himself. This was where his parachute was so his safety man on the ground had to check it hadn’t fallen out/set on fire/been eaten by cats/whatever happens to parachutes that have been packed but needs checking. The commentator said that on one of the test jumps – that was from like just 80,000 ft or something, so no biggy – FB hadn’t heard the safety guy say that the parachute was OK but jumped anyway because he assumed that the safety guy had said yes. Fair fucking play. 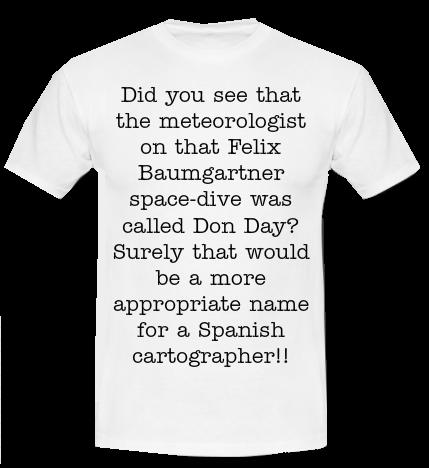 The t-shirts EVERYONE would be wearing had Stephen Fry made the joke. He didn’t – I MADE THE JOKE, by not wearing this t-shirt you are contributing to an awful kind of prejudice.