I don’t have a daughter locked in an underground lair who I impregnate on a regular basis. I don’t have a scrapbook of the finger nails of random children I have melted. I am not this kind of bad person. I am, however, not a nice person around OTHER people. I have no patience, I can’t stand listening to people talk and people’s faces often make me wish they were in a big furnace. So being in an airport full of people when I have had about three hours sleep and these people are surrounding me is not a good place for me to be. In fact it’s a bad place for me to be.

The average (modal) person here is just about Mancunian – maybe Scouse – in is 40-60 and is, without a doubt, an absolute cunt. I think the generation of my parents (maybe a bit younger) is definitely the one which I despise the most. They don’t seem THAT old but they are horrible, horrible people with values that repulse me. I saw a man berating his wife across a restaurant for not being close enough to their bags. She was sat next to the bags with her hand on them but he seems to think it is OK to be completely despairing and disparaging towards her across a room full of strangers. This happens at the same time as a woman getting in a rage because she can’t find her coffee that she has bought a couple of minutes ago. She has walked away from the coffee shop and now can’t find it. She thinks it is reasonable to go back to the coffee shop and demand another coffee. They give her a replacement coffee.

The combination of the man screaming at his wife and the coffee shop rewarding the idiot make me leave the queue I am patiently waiting in. This is a good start to my holiday. I cannot tolerate human beings. They are my worst thing – If I could have one thing it would be probably a bigger cock or several inches in height. I wouldn’t waste a hypothetical wish on being more tolerant. I wouldn’t mind being a bit more tolerant; but I would prefer other people just not being cunts.

I move to WH Smiths – chasing the dream of finding something that splits the difference between indifference and needing something. This turns out to be a bottle of Coke Zero. As with most places at the Airport WH Smiths has one of those clearly defined queuing areas. All the way through the area there are signs informing people that they need to have their boarding passes ready in order to be able to buy anything. EVERY person in front of me gets to the counter only to act amazed when they have to produce their boarding pass (“But I am only buying a puzzle book”) – and then take a minute to find the pass (that they are holding in their hand). Like they all got to the security when going through passport control and still had their belts on for the first time they walk through the metal detector; HOW MANY TIMES DO PEOPLE HAVE TO GO THROUGH AN AIRPORT BEFORE SOME THINGS BECOME SECOND NATURE?

I stop for a short time to sit down and think over not having brought Skagboys with me. Realising I can justify almost anything in a departure lounge, by classing it is a last minute impulse, I download it to my Kindle.

Fortunately I get to escape the mass of people in the departure lounge. Unfortunately this means going to the gate and then onto a plate with more people. It is not a flight with unassigned seats – we were assigned seats at check-in. Still, people refuse to sit down in the ample seating before the gate opens and stand by the entrance to the gate as though they are improving their experience in any way whatsoever by being the person stood where they are stood. There is one man there I have already decided I hate. His wife has clearly organised everything but then he thinks she is incompetent, at the check-in he takes all the documents off her as though she cannot manage. He also acts as though moving the cases the instant the queue in front of him moves makes him achieve getting to the front any quicker. He has a checked shirt tucked into a pair of shellsuit bottoms – with shoes. He does not die when I look at him, confirming (for the millionth time) that I do not have the power to kill people by hatred. He is one of the people stood by the gate door – shaking his head at his wife who wants to sit down.

Through the gate onto the shuttle bus. I was stood next to two couple. The two men were laughing a lot. Apparently one of them had a different hairstyle on his passport picture. This is one of the (many) moments where the popularity of Michael McIntyre is understandable. The hair based hilarity isn’t open. One of the men is carrying a Shelly’s Hairdressers bag. The other man says to the female half of the foursome, “I didn’t realise he was a mobile hairdresser.”  I try to calculate if this is as unfunny as the alternative: “I didn’t realise his name was Shelley.” Before I can complete the calculation there are jokes about whether or not he has brought his hairdryer – but he is balding and what hair he has is closely cropped, he would have NO NEED for a hairdryer…wait, it is sarcasm. Haha! Great one. Fortunately the shuttle bus ride is brief and I don’t have to listen to many more hair-based hilarity.

The flight is fairly uneventful. There is one moment when a woman waiting for the toilet – fourth or fifth in the queue – at the front of the plane is told that there are two toilets at the back that are not in use. She seemed very sceptical and though looking to the back of the plane and seeing no queue clearly decides that it is not worth the risk of walking 20 metres to two free toilets when she KNOWS she only has to wait for three more people to use this toilet and she is next.

The coach from the airport to the hotel is made slightly sickening by a man in front of us having really long fingernails. Not just a bit long, like half an inch long. He is part of a big group/family of Scousers who are over for a wedding. The fat man with the fingernails is clearly the uncle who everyone tolerates despite him being a twat. He makes a very big deal out of having his whisky & ginger on the coach – that he wasn’t allowed on the plane or something. Everyone ignores him, despite him saying to about four or five people “I’m having it now,” before raising his whiskey miniature to indifference from his kin.

When we finally reach the hotel my girlfriend and I are greatly relieved that there is only us and one other couple alighting. It is unlikely that we will find people as annoying as at the airport/on the coach at a hotel likely to be full of English people surely? [And it was – the only annoying people over the next week will be when I am looking to be annoyed, it will not be rubbed in my face.]

The big advantage of having flown so early was it still being pwopah tasty sunning weather by the time we had checked-in. With factor fifty smeared all over my big fat legs it is only a matter of time before I am slightly less pale. 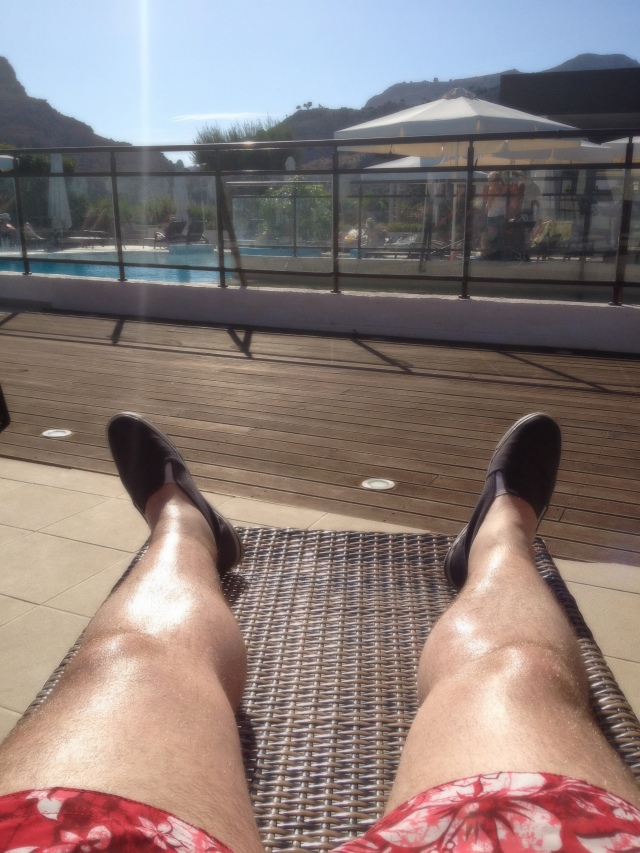