It was a kind of bizarre love triangle with three women in it that involved two women (girls) going out with three different men (boys). I’ll try and explain it using this diagram – it should be noted that this is pieced together from my memories of it and I wasn’t paying attention at first. 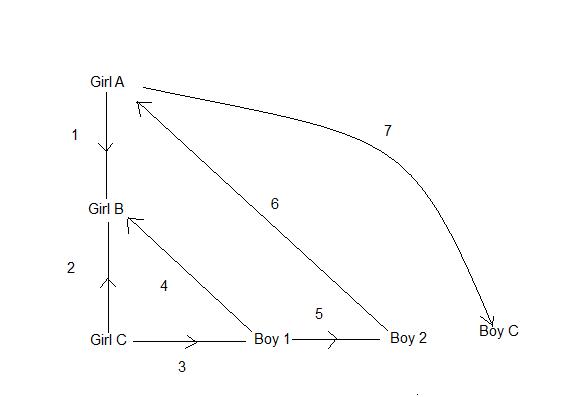 (1) Girl A and Girl B are like pure BFF.
(2) Girl C wants to be BFF with Girl B but that likes totes was never gonna happen even though Girl C tries hard to be friends with them all. In a later TV documentary Girl A will reveal to a documentary TV crew that Girl C completely hated her.
(3) Girl C ‘becomes’ Boy 1, inventing Facebook and MSN profiles to tell Girl B that she is lovely and loves her (he is called something like Mack Van Cruisepitt).  romance.
(4)Girl B doesn’t think Boy 1 is anything other than a hot young boy. Girl C wears hats to cover up that she is actually a girl that Girl B and Girl C know. It’s a pretty dreamy.
(5) Girl B want a boyfriend for Girl A, she tells Boy 1. Boy 1 suddenly has a best friend who is really likes Girl A and called something like Stain Gland.
(6) Boy 2 (who is Boy 1 and Girl C also) Facebook and MSNs Girl A. They fall in love three minutes into the interaction. Girl A is well into kissing and stuff but Boy 2 keeps aggressively groping Girl A, several uncomfortable fingerings take place. Sounds a bit rape-y the way Girl A tells it to a TV documentary crew a couple of years after the event. Girl A is proper annoyed at this and tells Girl B how Boy 2 isn’t what she wanted in a boyfriend.
(7)Girl A doesn’t like Boy 2 anymore and describes what is wrong with him. Nine minutes later Boy 2 dies of a cold. One minute after that Boy C (who is Boy 2 and Boy 1 and Girl C) appears as a friend of Boy 1 (who is Boy 2, Boy C and Girl C). Boy 1 is now in hospital with some disease that means he can’t see Girl B. Boy C is like Justin Bieber in some pictures on Facebook but always wears a hat and a hood pulled down over half ‘his’ face.

Then it all gets a bit messy – yes now it STARTS to get a bit messy. Boy C kind of rapes* Girl A (using a strap on dildo). During this she actually ‘sees’ his face and thinks it is Boy 2 (or maybe Boy 1, I was tired) because he has the same face (but she never thought any of them looked like each other before – because they wear hats and hoods, maybe no-one would recognise Bruce Wayne was Batman after all..) I think she thought it was Boy 1. Girl B is all like “how can you have had sex with him when he’s in hospital?” but it turns out he IS definitely in hospital but can’t prove it. At this stage (again I’m hazy) Boy 2 says it was him what done the sex on – in a Facebook post, saying he doesn’t think it is fair Boy C is getting the blame, which seems less noble when you remember Boy 1/Boy 2/Boy C are all the same person – so the person stopping an innocent person being accused of something he didn’t do is the same person who did it.

The Boy 1 has sex with Girl B; I think this is less forced, but my memory is not what is was (I think – I can’t remember if it was ever any good!! LOLZ!!!) again using a dildo (because it is Girl C, remember? So, no penis). I forget how it all unravelled. By the end of a story like this you’re kind of all confused out. Especially when the girls – one of them to camera and you can see her, the one who went out with Boy 2 and Boy C; the other is like the shadow/hidden identity thing – only use masculine pronouns even though the interviews take place now and they know it was this girl. To be fair the main girl of the documentary (Girl A) doesn’t seem to be portraying her self better retrospectively, admitting that she still loves Boy C even though he doesn’t exist – and that he (who doesn’t exist) will always be her first love. Which is fucking tragic really.

What seemed unbelievable (more unbelievable than ALL of it, which I still don’t believe) was that no-one cottoned on that any of these were the same person despite them all being aware of all the personas and one of the girls being intimate (and I mean in a more innocent way – close faces when kissing) with two of them and both Girls A and B knowing Girl C also. It’s making me question everyone I know isn’t the same person. From here on in I am going to insist on everyone I know being in the same room if they want me to believe them they are different people.

I know there is some naivety in youth but some of the stuff these girls put up with was mad: they would wait until four in the morning for their boyfriends to turn up despite them saying they were one minute away for 6 or 7 hours. They didn’t turn up because they were the same girl but that’s another (the same) story. Also when Girl C was Boy C and interacting with Girl A (s)he did so by sending text messages even when they were in the same room and she was talking (yes – (s)he answered to verbal communication by texting Girl C even though she was sat next to her(im). AND the girls (Girl B and Girl A) went to Boy 3’s house once and were told by the woman who answered the door that she had never heard of the lad and that he definitely didn’t live there. The girls believed the (texted) excuse that it was a security thing.

*I’m not trying to make light of this act but it is never called rape in the show but is basically described as a forced sex act.
** Did: naturally my strike rate with 15-year-old girls is quite high now.