There is no denying the hologram of Tupac Shakur that appeared at the Coachella Music festival has caused a bit of a storm the last few days. Especially around me as I keep going on about it to an endless list of uninterested people (artistic license: I have talked to about 7 people about it and some of them were quite interested). It is not the first time a hologram has ever been seen, nor the first time a dead person has been rendered hologramatically but it certainly seems  the most effective in terms of generating publicity. The fact that is not the hologram of an old performance but an entirely new creation – yet is so naturalistic – certainly has been a part of that.

For a moment I wondered if all the conspiracy theories had been true: maybe ‘Pac wasn’t dead at all; maybe his death had been faked…by the hologram industry. Holograms seemed like the answer to so many problems 20-30 years ago, problems such as giving Panini football stickers showing trophies an edge, or creating a realistically human version of Michael Jackson for Disneyland Paris (Michael Jackson having been classified as ‘alarmingly’ by this stage by Disney executives experimenting with using only degree adverbs when describing things; adjectives were restored by 1997).

Wasn’t the solution to the hologram problem obvious? Fake the death of a leading figure in the hip-hop community, the death of any other people in revenge attacks could be considered collateral damage, allow him to continue to satisfy his artistic urge by imprisoning him in a recording studio – in fact release the records to generate further income to develop hologram technology; a cover story of reams of unreleased material would be believed by a gullible planet.

Then years later allow him to perform at a festival for a couple of songs before chaining him back up again. Tell the amazed world that it was a new brilliant hologram and watch them queue up to order their own. As business plans go it’s pretty flawless. The only collateral damage would be wrecking the lives of some African-Americans (as they were known): something which in the business plan of an average US company isn’t even collateral damage, just the norm.

Fuel was only added to my conspiracy theory when my mate Greggy sent me an article about it after I wondered in text how they had done the voice (Tupac mentions the Coachella Festival by name despite it not being invented when he was ‘killed’) and it was revealed that no-one had revealed how they did that bit. BY GETTING TUPAC TO DO IT FROM HIS UNDERGROUND PRISON CELL-COME-RECORDING STUDIO, that’s how.

The less believable alternative is that this was just a high-quality expensive hologram of a dead singer and actor, but that is a bit ‘through the looking-glass here people’ for me. But just let’s imagine that for a minute: what is there for this hologram? Yes, in the short-term the interest is high. By not resting on his holographic laurels he could do a world tour, he would be rolling in holographic cash. Then what? If handled badly there could be no end of ways it could go for the projection of Tupac Shakur.

Seeing how successful the hologram of Tupac could lead to…a hologram of Biggie Smalls. These East/West coast holograms could diss each other’s projecting hubs and pixelizing clarity ending in a tragic exchange of hologram bullets. Isn’t it a famous saying about history: it happens first as a tragedy and then repeats itself as a hologram?

Perhaps the hologram 2Pac would have learned the lesson from his real-life self. Perhaps he wouldn’t get embroiled in the posturing and violence of the hip-hop community. But then what? If he shied away from the hip-hop community where would he turn? Perhaps to his other love, acting. But are there really that many roles for a jobbing hologram of a dead hip-hop star? Sure a guest role in Two and a Half Men would be all well and good but I’m almost certain a pilot for his show would follow, only for a series not to be commissioned after the pilot audience claimed the repeated 5 minute performance of two songs from Coachella a year ago wasn’t enough to sustain any emotional involvement in the character.

Hologram Tupac would drift into depression: perhaps slipping into old bad habits, using holographic drugs. Even though he had turned his holographic back on the pitfalls of the hip-hop community, society would see him as a second-class citizen: more accurately it would see him as a specific arrangement of light particles and he would be driven to a life of holographic crime. Ultimately he would be commit the sin of hologram murder, high on hologram heroin, and face the ultimate price: despite mass appeals from a society regretful of their hologram prejudices, his hologram light bulb would be switched off. 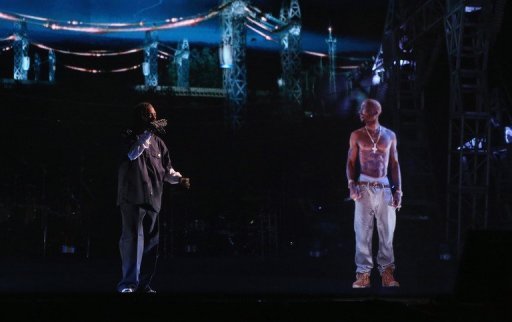 This entry was posted in Uncategorized and tagged 2Pac, coachella music festival, hologram of tupac, Tupac. Bookmark the permalink.