Above is a list of some things, let’s call them opinion-o-facts, concerning the Manchester City footballer Mario Balotelli. None of these is unique to Mr Balotelli though the combination describes only him (why always? you might ask dryly).

Today Mario did a bit of a bad tackle in City’s game against Arsenal – which was not seen/not punished by the referee. He was also sent off right at the end of the game after the goal that gave Arsenal a 1-0 win (Balotelli was not in any way to blame for Arsenal’s goal). He has, however, scored 13 league goals this season. Yet, according to Sky, specifically the polymath of football Jamie Redknapp, and the collective of  football print journalists on Twitter, Mario was now responsible for City not winning the game, not winning the title and, very probably, both the holocaust and everyone whoever stubbed their toe EVER.

Despite him being the only striker at the club maintaining an input (scoring goals) in City’s recent capitulation and despite there being a playing staff of about 25 other players and a management team it seems the whole thing is down to Balotelli and – maybe – the manager Roberto Mancini buying/playing Balotelli.

It’s quite a turnaround in the projection of Balotelli by the British media. After an early period of uncertainty everyone decided they loved the ‘madcap’ Italian this season. He was the rollercoaster ride used as the selling point of the Manchester City Theme Park. Whether it be (allegedly) giving money to homeless people, letting off fireworks inside, breaking into a prison for women – to see what it was like, fucking prostitutes or openly sulking in a game, it was all seen as brilliant story to counteract the boring unnewsworthiness of him generally playing quite well and scoring frequently. Everyone loved him – and rightly so, because he IS INTERESTING, UNPREDICTABLE and FUCKING MENTAL.

Yet despite this being exactly why everyone loved him, they all got their collective arse out when he did something a bit stupid. Of course, no-one has ever committed a bad tackle in a football match before; certainly Wayne Rooney hadn’t done a clearly pre-meditated, nasty, angry tackle for United in an earlier game that day also broadcast on Sky. Or he had but it was not commented on by Sky; replays were not shown, and the Twitter football hive mind all ignored it. Clearly Rooney is in the middle of a period where he gets away with everything.

The lines between football and celebrity blurred a while ago. The nature of building people up to knock them down was common to both streams of tabloid reporting anyway. It is amazing how easily people are swayed. In a survey of everyone who watches football after the game 94% agreed that Balotelli should be taken to a place of Noel Edmonds’ own choosing and be shot through the neck until he be dead. Research showed that these 94% (over 20 million people) also signed an online petition to force the Pope to canonise Balotelli as a living Saint of Being Totes Amazeballs – just after Balotelli wore the Why Always Me? t-shirt , which he revealed after missing an easy chance in Manchester City’s 0-0 draw with Manchester United earlier this season.

Ultimately, despite it not being what interests people, success on the pitch for City somehow legitimized MB’s behaviour. Him not being responsible for City’s loss of form seems inconsequential. Similarly, it was now seemed his antics were an unwanted distraction and were making City fans cry in the stands.

Because of the nature of what I have said about unpredictability of the British popular media AND Mario’s inherent behaviour patterns, by the time you read this he has probably been pictured disarming a bomb, by accident (intention: to see if the bomb was the same as a Rubik’s Cube), and subsequently marrying pop-star Adele and they are now sitting on thrones after Simon Cowell apointed them the new reigning monarchs of Britain. As such you are probably in the last few seconds of liking him (again) before a Sun exclusive reveals him to be a right shit.

Wherever you are in the Mario Balotelli Cycle of Love, remember that the love and hate are transient: don’t go too far with either of you might destroy this fragile creature. If we are not careful the English game will lose him to Spain or (back to) Italy and the anecdotes will all be set in Madrid or Turin and Genoa: keep Mario’s car crashes on Deansgate, for all our fucking sakes.. 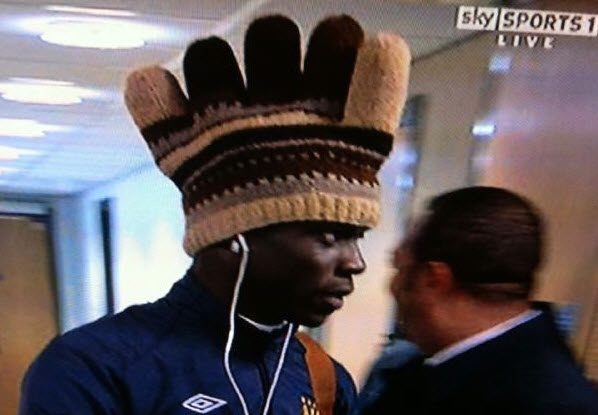 Unless you own and wear a hat like this do NOT judge this man.

Philip Bridgehouse has been supporting Manchester United since birth (yes – that’s right: BIRTH) and these opinions in defence of a Manchester City player are not expressed lightly.