No one man should have not all this power (and water)

I had a text message when I woke up from my girlfriend “DEAR MASTER BRIDGEHOUSE STOP ELECTRICITY DOWN IN FLAT STOP ALSO NO WATER SERVICE STOP HAVE INFORMED LETTING MANAGERS STOP.” (I haven’t the heart to tell her sending a text message and composing a telegram in the 1920s are not the same thing.)

Something to look forward to when getting getting home, an absence of electricity and water; two phenomenon not celebrated nearly enough by me. However, the only thing absent when I returned at lunchtime was the absence of their absence, for they had returned! Hurrah, electrical current and tap water all round.

The thought of my girlfriend stumbling about in the dark this morning had been all well and good, hilarious even. This, though, was a different matter. There was toxic fume emitting foam on the oven for crying out loud. And more importantly it was happening to me.

The kitchen does not have a window and I was starting to feel drowsy from the cleaner. Was this really happening or was hallucinating a lack of utilities a side product? After getting some fresh air and clearing my head I could confirm it was happening, though I had also clarified the Playstation calling me a ‘shit for dick’ and telling me I was going to ‘piss heaven’ WAS a bi-product of the cleaning fumes.

In this situation the lack of water was particularly a bad thing; no electricity is always a bad thing. It is just not on. Yes, my laptop was still on – thanks to the battery – but the broadband hub was off so there went my internet. A laptop without the internet is basically a calculator: a waste of time, unless you need to do some math. Ok, I did still have access to the internet via my iPhone. I could still email, tweet and check my fantasy football team but my iPhone battery was down to 22% so I had to limit myself to the essentials. Checking my fantasy football team would have to wait.

My books looked at me from the bookshelf, as if to say ‘how do you like me now?’ I looked at my Kindle, as if to say ‘what the fuck are those paper twats looking at?’ My Kindle still had plenty of battery. And the electricity returned within 30 minutes away. With the internet back I was able to search the internet to find out if the water was off for everyone, or just for me. There was no news. There was a video so you could check if it was your water. I did what it said in the video. It was not just my water.

Hours passed. Two hours is still ‘hours’. Apparently a pump was being repaired and it would be back on by 5.30. 5.30 came and went and the taps still remained mute. At about half six I started to thing this was getting out of hand. I needed a shower and I needed to finish wiping down the oven. At this stage I thought maybe I should try turning the water on and off like it said in the video. This was also the stage I realised I had turned the stop tap too far earlier and that the water had probably been back on for an hour or so.

So not a case of post hoc ergo propter hoc. (One for the West Wing fans.) 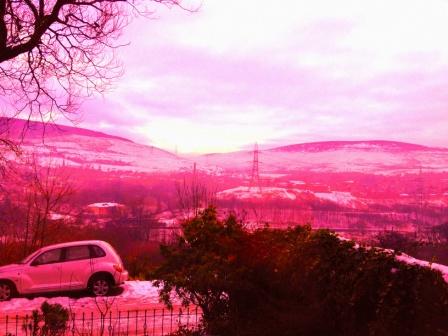 The view from White Manor this morning (about lunch time)