Going Underground or Observations from A Registered Oyster Card User

“This is Rabbi’s Revenger, this is a combustible line train terminating at Steve Redgrave”

I do love the Underground. I mean the mass transit system in London – not just stuff that is generally under the surface level of the ground.

The emergency system leaves a little bit to think about though. If you pull the emergency lever you get to SPEAK TO THE DRIVER. I realise in some situations speaking to the driver may help. However, most of the situations I imagine thinking of myself in on the Underground that I would describe as an emergency I don’t think pulling a lever to speak to a driver would help in. I’m specifically thinking of being attacked physically or the train crashing. The former makes it hard to imagine me being able to get to the lever and then sustain any time to communicate a message to the driver AND the driver be able to do anything about it. In the latter scenario the driver probably (a) doesn’t need telling and (b) has bigger fish to fry (that’s a metaphor, although if a train driver was frying fish instead of concentrating on driving it might explain why the train might be crashing).

I have been mainly disappointed with the buses (incorrect plural, I only went on one) and trains of London for not offering me a racist woman ranting about immigrants – so that I could film it and The Sun and The Mail could make a big deal out of it, as though these weren’t the sentiments their rags had been pushing for the last 30 years. By reporting it with outrage they get to put it across to their readers who will be nodding going “she got a fackin point though ant she?”.

Oh – and this isn’t anything to do with the ‘tube’ – is Bernice only a name in the South? I never run in to anyone called Bernice but every five minutes in London I overhear someone shouting ‘Bernice’ to someone else, someone I imagine is called Bernice (different Bernices – I am not saying it is the same Bernice every time).

In my notebook – yes I do actually make notes that help me write this, you really can’t tell I know – I also wrote down a joke based on a poster on the tube saying ‘Malaria Kills a Child Every 45 seconds’ [you’re already chuckling eh?] with a punchline that included the name ‘Gary Glitter’. But It’s a bit of a shit joke and horrible thing to make a joke out of, so I’m not going to write it.

Yeah this is the moment my trained pulled away – taking me back to the place where I belong. London did offer me a bit of Christmas and gave me a massive can of Coke (Zero). But in many ways it defeated me: no pencil sharpener and no snow shaker (*struggles to remember if he has referenced wanting a snow shaker as he always had one when he was little*). 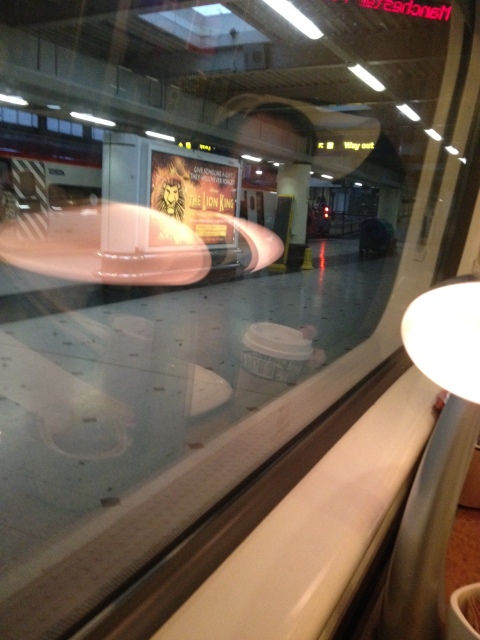 London: I'm not really leaving you, I'm just going back to Manchester