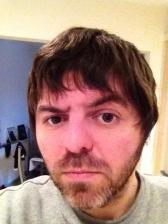 just a boy with a new haircut

I was quite happy with my hair-shortening overall. I did chicken out of describing my desired hairstyle because there was a cool looking man sat net to where I was having my hair cut (and because it involved talking about a famous person’s hair. I had assumed he was the manager or something but he was just waiting for a haircut himself. But he wasn’t – he was waiting for a haircut himself and when he said what he wanted he just said “like Charlie Watts in 1971”. The prick – who got the hair he wanted. He was actually a bit of a prick to be fair but he did get the hair he wanted though…hmm that was just the previous sentence repeated again. Poor.

Speaking of fans @MissL_H sparked a veritable Twitter festival of remembering childhood weirdness when she tweeted me how she also used to wish she have an inhaler. Not to be be left out @emsyb1 said how she had wanted to be left-handed, wear glasses and always be 15 in a school uniform with pigtails – and anyone who says this last one was MY idea for Emma is a right nasty shit who just wants to make out that I am depraved (though in a totally unconnected bit of info I will admit that if I ever have a son he will not be sent to an all boys school as I think it runs the risk of creating men obsessed with school uniforms and the like). Because two people have vaguely agreed with me I am now going to assume that everyone wanted to be a left-handed asthmatic at school.

I can’t tell other peoples’ stories – they should get their own blogs – but there was a corker tonight from The Drum who had locked himself out of his flat in the early hours of Saturday morning and ended up wandering up Princess Parkway with no socks and shoes on trying to flag  a taxi down (that wouldn’t stop for him because he had no shoes on). He ended up spending the night in a flea pit hotel. And his parents were coming to see him on the Sunday and his phone was locked in his flat. You should ask him for the story some time. Actually I kind of ruined it by giving away all the best bits.

Then I drank too much.Kind of breaking one of my rules of Leavecember, but simultaneously enforcing a personal life motto. Some times life can be tough.