I really am enjoying Capital FM Manchester’s breakfast show. Even phone-in competitions, that usually annoy me (who gives a fuck what someone else is winning? Not me), are enjoyable. They sometimes make out that one of the contenders is really worthy. They don’t demonise the other person, just make out one of them really needs the prizes. Recently it was a woman who was due to go in to labour. Then the other day it was for Rihanna tickets and one of the two women was made out to be a saint because she had tickets for Rihanna the week before but gave them to her friend because it was her¹ birthday.

As lovely as both these people sounded – differing degrees of niceness: becoming impregnated/giving away something you really wanted because it was your friend’s birthday – I don’t really think either deserves anything more than any other person entering a phone-in competition². What I liked about these occurrences was that the woman each competed against was openly not bothered about how pregnant/nice their competitor was; they wanted to win the fucking Arndale vouchers/Rihanna tickets. They weren’t mean about it, they were just like ‘whatever I still want the things I wanted before I knew that’. Lovely stuff. I couldn’t figure out if it was particularly Manc, particularly symptomatic of modern greed or if I should just fuck off and stop over-thinking stuff.

¹her=the friend, it doesn’t really make sense for someone to give something away for their own birthday does it? Unless it was that little fucking prick from the John Lewis advert – he would probably do something like that the little douche fuck.

Look at what I did to this flyer about the strike action next Wednesday. I am funny. (The text does figure below the image: I know you could be thinking this was the end of today’s entry.) 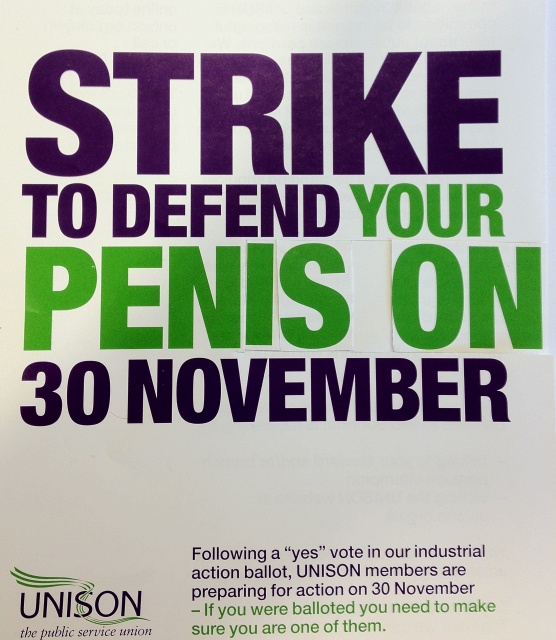 But, seriously, next week’s strike does raise a serious issue. And I don’t mean the pensions thing – clearly it does raise that issue, that its entire point. I mean that I want to be part of the picket line but that will involve standing with other people I work with . That’s a big downside to doing anything for me, indeed it’s what makes work so shit – that and the work itself being rubbish. Also you’re supposed to where green if you can (UNISON colours) and I don’t really like green. I suppose I could just wear red and pretend it’s the whole colour blind thing wrecking my eyes.

I think the important thing to remember is that I am striking to protect OTHER PEOPLE’s pensions. I don’t have one. The flyer I defaced should read: STRIKE TO DEFEND YOUR PENSION. YOUR pension, the selfish bastards. I am standing with my brothers and sisters for the principle of the thing. I will be getting nothing out of it myself, I am giving so others should have a better life – like the soldiers who died in the war. I am not saying that I am some kind of hero. If the people of UNISON want to insist on commissioning a giant brass statue of me in some heroic pose then so be it; I am not going to say I don’t deserve it. It wouldn’t be graceful. Perhaps they could erect the statue in the town centre – somewhere with a daft name and no history like St Peter’s Field/Peterloo could be name Bridgehouse Field in honour of me and my stand for other people’s pensions so the area could be associated with a brave rebellion against oppression rather than whatever it is associated with now.