Today I worked out that I could (technically) have all of December off work and not even use the remainder of my annual leave. I wont bore you with the number – no I shall excite you with them…POW! December has 31 days. Biff! 6 of these are taken by the first 3 weekends of December. Crud!! My employers close for business on 22 December until re-opening on 2 January. Shazzam!! This means that December accounts for 16 working days from my perspective. POW! [again] I have 20.5 days of annual leave remaining…

How sexy was that math? I am pretty sure had me doing that math been televised; and there been a team of pundits passing comment on it; and that team had included celebrated Dutch footballing legend Ruud Gullit, he almost certainly would have described it as ‘sexy mathematics’. It was that sexy. Had it been much sexier it would have actually been sex.

Calm down from the sexiness of the math and realise what it means: I could feasibly finish work on Wednesday 30 November and not return to work until Tuesday 2 January 2012. That’s not even December off work – that December off work and another day. There will be limitless (if the limit is just one or two reasons) reasons why I wont be able to do it, but  just the idea of it is good. My rationale: I hate work and positively love not being there. When I revealed my amazing discovery to my colleague Paul he said I would be bored as fuck after a few days. He might have a point. But imagine how long my blogs would be each day¹…

There is also the altruistic thing here to take in to account: for my colleagues this would mean all of December without me at work. As you don’t work with me (unless you do) you wont know how annoying that is (again, unless you do work with me – then you do know how annoying that is). I am thinking of more than myself lying in bed for a month here, I am thinking of the greater good.

¹A very real answer to this question is zero words a day: I think I might jack it in when I hit the magic 365 days mark. Which is the same day I would celebrate one year of doing it. This coincidence is too much to ignore. And that happens in November.

²Anyone spot the blog sub-headline pattern yet? It was not intentional and I only realised it after I did it. True story. Struggling? Tomorrow’s could be What’s The Frequency Kenneth or the name of any other REM song (apart from Leave or Drive).

Noel Yourself, Not Thine Enemy

I saw Noel Gallagher’s second solo gig tonight (this discounts all the gigs he did on his own while he was in Oasis or the ones Oasis did without Liam. I didn’t say it was his second solo gig, he said his Dublin one the other day was his first one: I’m playing by his rules). He was very good. Like very good. In fact it was like seeing someone you love the music of playing it live…in a smallish arena with a lot of other people who also really like him (and sing the words of his songs as he does creating a really great collective feel – but feeling you with the occasionally leaving you with the feeling that if everyone just shut the fuck up,  just hearing him with his guitar – when he was doing the numbers without his backing band – might be quite awe inspiring).

It seems inevitable to compare it to Oasis or Beady Eye. Well I’ve seen the former many times and the latter once. And I can say “it was very good – why do you have to compare it to either of those, you dick!?” Seriously though, both the album and this gig were superior to the respective album/gig by Beady Eye. Noel’s album is better: fact (in my opinion). The gig was also better than the Beady Eye one. To be fair to Liam’s outfit, Noel did a fair few Oasis songs. And it’s a little harsh to compare that to Beady Eye starting from scratch and making something new without looking back. To be fair to Noel – and ‘the public’ : he wrote the songs (and mainly only sang songs you associate him with singing, other than Supersonic) and people want to hear them. Whatever (eh???) the talk of an Oasis reunion it would be odd to suggest Noel not sing Don’t Look Back in Anger/Wonderwall/Half The World Away/Talk Tonight/It’s Good To Be Free/Mucky Fingers/The Importance of Being Idle nor deny it was an experience and half to be in a small venue (compared to where I am used to hearing them) with everyone singing along.

If I was to say one neagtave-ish (it’s not really negative, maybe it would make one song feel bad about itself) thing about the gig it would be that given Noel has made a great solo album and played many Oasis classics it seemed a bit odd to finish on Stop Crying Your Heart Out. Don’t get me wrong – I love the song; it’s by no means at the top of Noel/Oasis’ catalogue though. And seems linked in my mind to England’s ejection from the 2002 World Cup (of soccer). Minor quibble. Oh and he didn’t play Stop The Clocks – which he banged on about for years; he’s finally released it and he doesn’t play it. What a bugger.

Phil, Phil – why the fuck are you banging on about the gig itself? What about you only having a ticket sat on your own? That’s what we’re bothered about.

Shit. Sorry: sometimes I get caught up in talking about other people. Well, It was ok for an hour or so. I had a great view. I did have the thought 2 minutes after sitting down: why don’t you get one of the 4 people you are with, who are standing downstairs, to nip out with one of the others’ ticket so you can get back in with it? Only I couldn’t get the text through. That’s right at the O2 Manchester Apollo I couldn’t get a text through from my O2 phone to either of the O2 phones I was texting.

Fuck, that’s a shame. Seems clear you were really enjoying the great view in your seat; would have been great if you were cool enough to blag your way in the standing bit for the last half hour to enjoy the sweaty throb at the heart of the gig.

After an hour of the gig I was dying for a piss and a pint. I went and did both. Not simultaneously. And with my pint I thought I would go and try and get in the standing bit. Only just as I was thinking it would be easy I say someone coming back from a fag try to get in and get refused for not having a ticket. Shit: that would be why I couldn’t get in, I didn’t have a ticket for that bit.

So, I stopped my swagger and did the eyes-raised, ‘what-is-he-like-for-trying-to-get-in-without-a-ticket’, gesture to the security guy. The quickly glugged my pint. I had the security guy’s eye: we had the me doing the ‘what-is-he-like-for-trying-to-get-in-without-a-ticket’ thing with my eyes (for crying out loud). So I said “She’s told me not to have another pint, thinks I’m just having a piss”. He smiled. The fucking sexist dick – acknowledging a myth that some women are controlling of their partners. I finished my pint and went to walk in..he said ‘got to see a ticket mate’. I went, ‘she’s got ’em in ‘er handbag mate’ (dropping my hs ingratiated me further) he nodded and opened the door. What a sexist twat.

I found my peeps (after a bit) and enjoyed the last couple of songs/encore with the real people in standing – rather than the suits in the seats (actually just the same people but sat on seats). Before I found them I took this amazing picture, it really does show the quality of the iPhone camera: 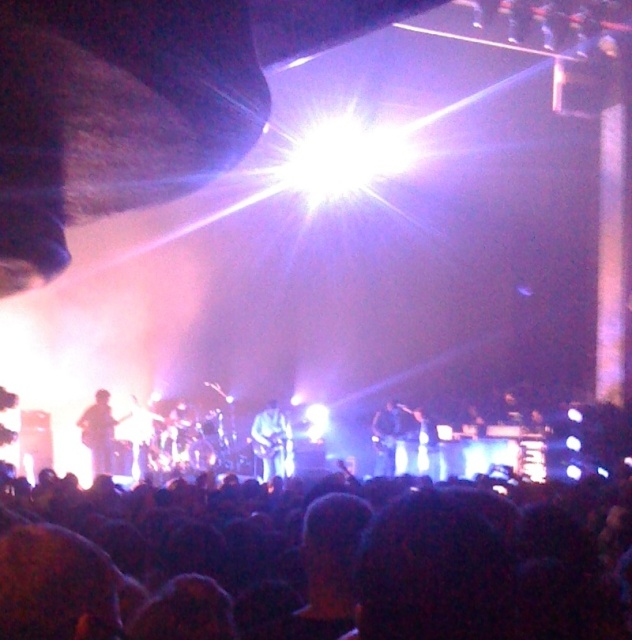