“Where did you watch the Rugby World Cup final?”

“No, not what sport was it the final of – where did you watch it?”

It sounds like an hilarious comedy sketch, but in fact it’s a potential conversation that I could have with somebody. Admittedly that person would probably be a bit of a twat. This was just my way of pointing out that I watched the Rugby World Cup final in the place where the sport itself was (reportedly) born. You couldn’t make that up. In fact even though YOU COULD NOT make that up, you still probably think I did. Well, I can prove I didn’t: here is a photo of the television we watched it on – in the Wetherspoons in Rugby (the place).

For many people just watching a sport’s premier game in the very town it was invented, and even gave it’s name to, would be enough; Danny Wallace would probably get a book and 6-part BBC2 series out of it. For us, however, it was just a coincidence: we needed somewhere en route to London to watch the rugger. Wetherspoons in rugby is pretty much like the other ones: it already had a decent crowd of losers necking pints at 9 in the morning. That’s not fair actually – they weren’t necking pints, one chap had 3 halves instead of a pint so he was necking halves.

Why were you going to London though?

If the previous paragraph was a bit confusing don’t bother re-reading it just read this: We went to London to watch an American Football game at Wembley.

No – this bit isn’t about what happened in Manchester while we were away. My boy Al had driven down, so we had to park somewhere. Fortunately Wembley provides car parks for people. They don’t do it for free, though, despite you paying £70 (x 4) for your tickets. No, they have to pay for Wembley somehow I suppose (like they will spend the next ten years paying for the Olympics. And the last ten. Ah well – do we really need a Health Service when we get to host the Olympics?). Fair dos, a nice safe car park well managed for a few hours, suppose it will be about 8 quid or something.

To park. To park!

A nice picture of Wembley

The Twin Towers 2: The Arch

(well it would be nice if it wasn’t shit. Part blame: me for getting them two minibuses in it. Part blame: iPhone for having a shit camera. Other part blame: me (again) for taking this with my iPhone when I had my camera in my other hand.)

The game in pictures 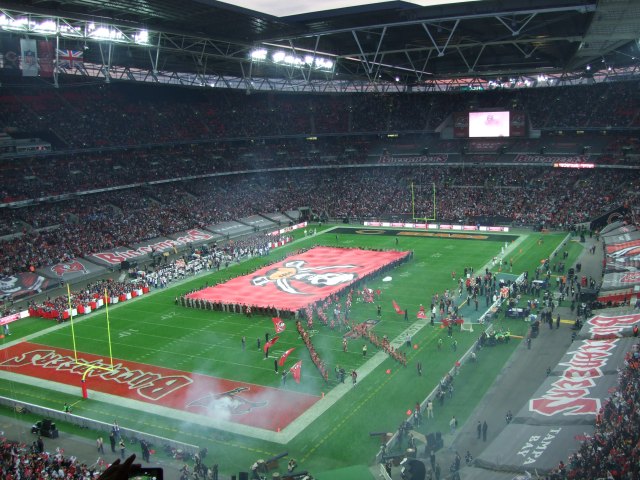 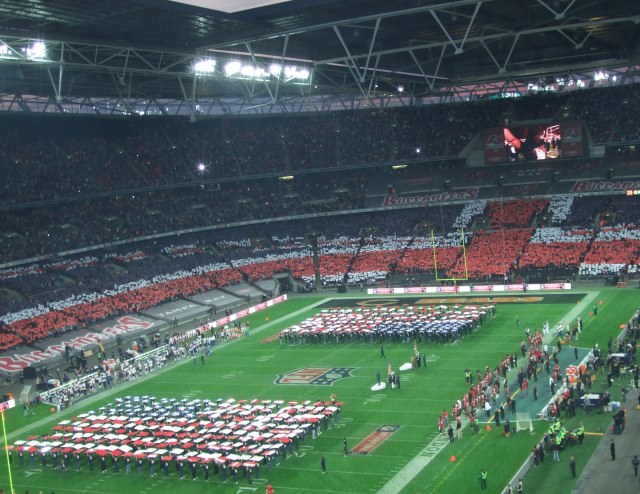 Still on the teams coming out..this is something with the US flags (the people on the pitch) and the Union Jack (the crowd). You see what they did there?

You wanted action shots?? No, well have one anyway - Bears homo QB Jay Cutler (it's ok I can say that, I'm a Bears fan) hands off to Running Back Matt Forte.

I can't remember what this is - the picture is really small in the bit you add the captions..wait a minute...oh right I remember why this is here: As the Bears go to kill the game off the scoreboard, not for the first time, tries to get the crowd going by saying 'Get Loud'. Such is the dogged anti-authoritarian attitude of the British public they mainly did make noise. With my Guevera-esque mystique I remained silent whenever the 'make noise' screen was showing.

¹ I did have quite a lot to say at the time – mainly just repeating “what the fuck was that?”. If I could up have come up with a decent pun based on one-six or six-one then I would have written about it just to use the pun. But I couldn’t.