Posted on September 10, 2011 by house78
This note annoyed me. I don’t know what this blog looks like on a phone so apologies if you are reading this on a phone and you can’t see the picture. It’s a picture of a piece of paper with writing on it. I will probably write the contents of the note as I go on..you won’t miss anything. 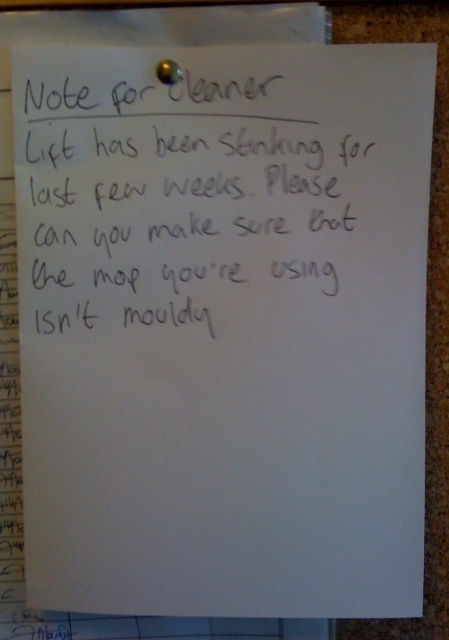 Let’s start with the background (and I don’t mean the cork/rosta). I live in a flat in one of a series of buildings that house a mix of renters and owner occupiers. There is a property management firm who look after the maintenance of the shared areas, you know: the hallways, the car park, the grassy bits. That fucking shit. There is a notice board near the door with notices for residents. So…
This is a bit insulting isn’t it? I know I can get annoyed by almost anything (other than my ability to be constantly annoyed, which I have learned to live with and feel quite affectionate about) but is this an overreaction? It just seems a bit snooty and condescending. And inconsistent with respect to punctuation and grammar.
Even the title. Who gives a note a title? Also who doesn’t have the ability to process that it’s a note. What’s wrong with just addressing it to the cleaner (Darling cleaner/Hi cleaner/Yo cleaning dude) or just writing ‘for the attention of the cleaner’. I mean I’m not overawed with the word cleaner generally. I think this is a deep Freudian issue about being the son of a cleaner. Without the (underlined) title Note for cleaner would a cleaner looking at it wondering who it was for?
‘Lift has been stinking for past few weeks’. Stinking. That’s a bit of an angry word to use in a note to someone you (a) don’t know and (b) are asking for something from. Stinking. Horrible things stinking. German soldiers captured by Allied Forces were stinking (conversely our German friend would have probably used the word when they were talking about our Semetic friends). I really can’t comment on the smell of the lift as I live on the first floor – and unlike many fat, lazy fuckers at work – one flight of stairs does not present to me an insurmountable obstacle. But if it is THAT bad and you have to use the lift THAT much (the building is four fucking floors, it’s hardly the Empire State building) then clean it your fucking self.
And what’s with the lack of ‘the’? Apparently ‘lift’ and ‘last few weeks’ don’t warrant the definite article. But mop does. Mind, this person clearly thinks a lot of mops.
Or – do you know what? Contact the fucking property managers, don’t write some snooty note to a cleaner you don’t know from Adam/Eve. And if you are going to ask a fucking twattish question, at least put a fucking question mark on the end of it. Who does the note writer think they are? They’re assuming the cleaner is either stupid or unprofessional. OR that they have no sense of smell. And if they have no sense of smell then it’s not their fault is it? (Sorry I am just asking questions to show off with my use of question marks now, aren’t I?)
I had the inclination to either take the note down so that the cleaner wouldn’t be offended or write something on it like ‘Note to twat: I’m earning £5.12 an hour and I told my manager the mop needs replacing, what more do you want me to do’ [and yes I left the question mark out on purpose, I’m such a wag at times]. I didn’t though, we still live in a country where people have the right to express themselves as they see fit the last time I check. My hope is that everyone sees the sign and thinks the writer is a twat. Sadly I think most people will see it and think it is (a) funny and (b) appropriate. People are cunts.
Prompts: